The Bacchanalian Gazette is a portfolio of work, designed, laid out and edited by Andrew.  Building a portfolio around the massive quantity of work from the night, could become homogenous, in this format the best of the night can be juxtaposed with images from elsewhere, making it an ideal format to express range of ability and subjects while upholding the integrity of each image.  The Gazette is not defined forever, for now it is a portfolio, it will morph, it will change with the times.   Limited to 100 copies per issue and distributed to individuals as seems fit at the time.

Issue 1 & 2 are 40 pages of photographs with some introductory and explanatory text. 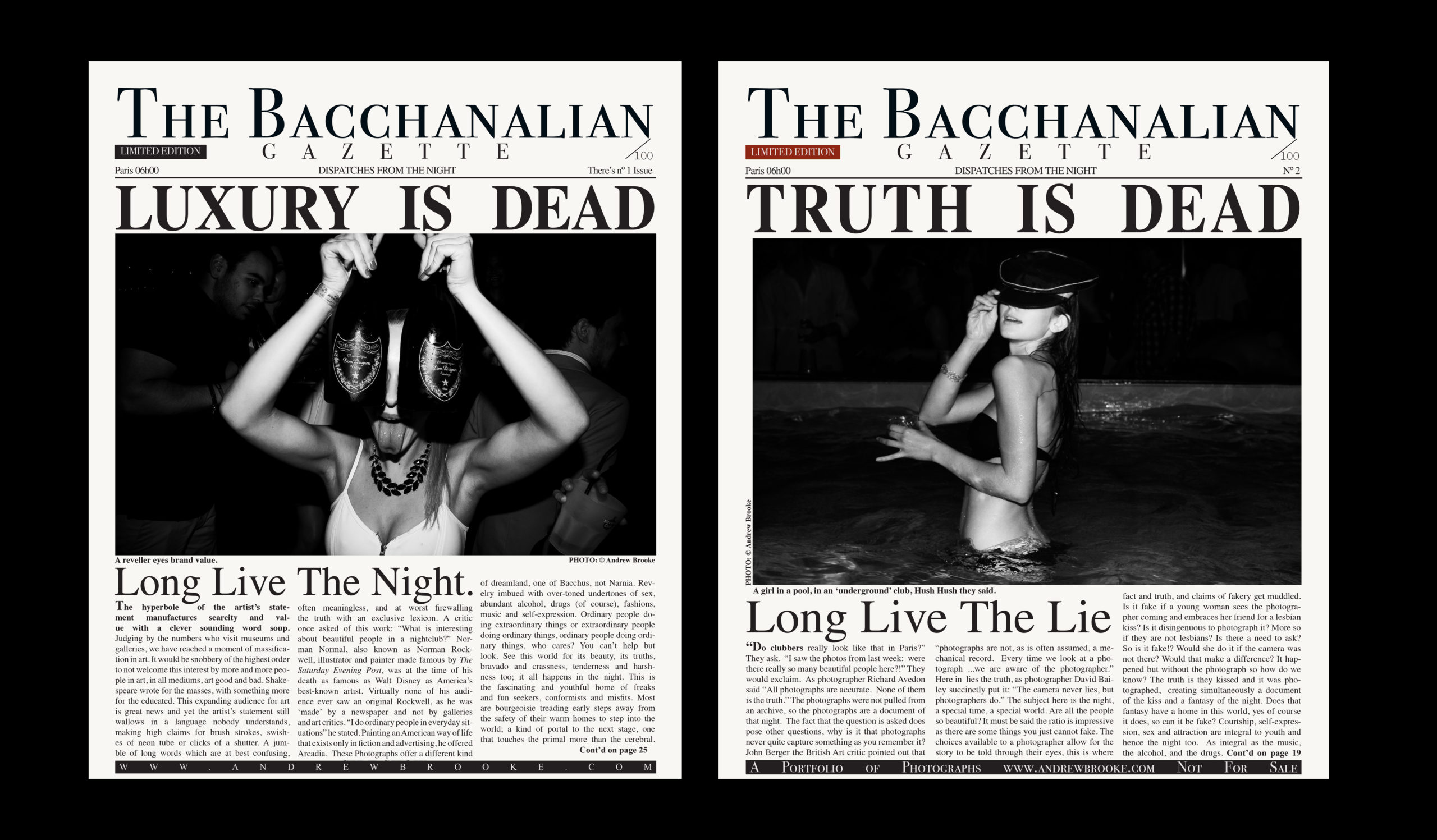 Forgotten Memories features in the Bacchanalian Gazette but is an earlier creation, and continues to be added to.  This is a series of similar photographs, stylistically consistent, and an unchanging subject: matchboxes.   The series supports an exhibition of between 20 and 50 images, depending on the venue. The colour prints are C-type prints from colour negatives mounted on aluminium and the black and white images from black and white negatives printed as Silver Gelatine Prints on gallery standard paper, a limited edition of 10 prints of each. First exhibited in London at The Muse Gallery in Portobello Road, an upcoming exhibition is planned for 2020 in Paris.   Below you will find some sample images which do not really translate onto the little screen and a text explaining their origins and the intentions behind the project. Prices and edition information available on request

Freely distributed matches were once ubiquitous. Found in every bar, in every restaurant and hotel all over the world.  They knew no cultural or social boundary, and were as available in the lobby of the Ritz as they were in a dingy backstreet bar, in any city in the World.

For those who may barely remember the days when you could smoke indoors, at the bar, or on airplanes, these branded matches were pre social-media marketing. They were part of life’s ephemera. It’s no accident they slipped into cinema as a MacGuffin, or the tool that saved the world, as they were everywhere and they are useful. While they were particularly useful to smokers; they were also an aide memoir, ideal places to note a number, an address, as well as lighting the gas hob or a candle, so helpful to everyone and as a result acquired everywhere and kept.

These little boxes or books travelled with you until they were lost, forgotten or used up. Most ended up in the bin, burying notes, names, dates and memories as they went. Others made it home, in bags, suitcases, and pockets. Collecting in drawers, in bowls, on mantelpieces, under beds and down the back of sofas.

This accidental collection came together from all corners of my life when I was packing to move house.  Eventually boxed up, sent to storage and forgotten, only to be rediscovered several years later: A sack of hundreds of scared, bent, torn and broken books and boxes of matches. It was like finding a stash of old love letters or diaries. They were sediment, detritus, archaeology of a time in my life. Reminders of where I had been, opening doors to memories which at the same time ask and ask. With whom? Really? When? Why? Did I? I remember! Or do I?

Memory is unable be the guardian of the truth as it is subjective, and it is a catalyst for our imagination.  As much as each matchbox offers a ‘memory’ it also offers imaginary tales.

When placed in front of the lens each matchbox seemed to tell me their tale. Even those that survived in a pristine state somehow had a message from their past.

I photographed them up-close, isolated in a plain uncluttered composition, to tease a story from each with exaggerated scale. Every design, scratch, striker, stain, mark, number or note offer something to the imagination.  Each box offers a story from our experience, personal or vicarious, real or imagined. A mirror to anybody’s and everybody’s story.

You don’t know how they got to look that way, yet you do.  Collectively these are our forgotten memories.

It Was Never About the Money - 1 min teaser

It Was Never About the Money is the working title for a documentary on the fragility of success.  Barney Edwards reflects on his days at the top of British advertising as a photographer and commercials director, as he fell from grace and descended into poverty, those who tried to help and those who would have nothing more to do with him.